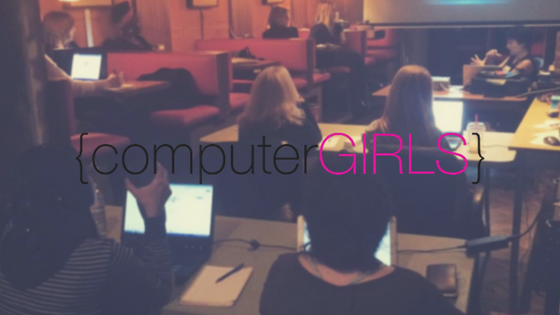 “Before coming to the class, my sisters teased me saying that I wasn’t the type to be coding. I’m glad these classes are challenging the idea of who can be a computer programmer.” – Computer Girls Participant

Computer Girls is an initiative to get more women in technology – from beginners to professionals. From 2014 to 2017, this program was funded by the Ontario Trillium Foundation in collaboration with Women’s Enterprise Skills Training Inc.

This three year grant developed curriculum, classes, workshops, networking events, and community events to highlight the gender gap in tech and support women in STEM fields. Almost half of all Computer Girls participants wrote their first lines of code at one of the classes. These classes were developed by professional female programmers and taught by women in the industry. For professionals, we hosted networking sessions and skill building workshops, while highlighting the contributions of female developers in Windsor-Essex.

“Coding is such a giant world and this class gave me an introduction to it in a fun way.”

“It’s important to be literate in the world of technology. I come from a legal background and we need to understand new technology when it’s being used in court.” – Computer Girls participants

The Computer Girls curriculum and classes were developed and taught by professional computer programmers with the aim to get more interested in coding.

These free classes introduced the public to introductory computer programming, with an emphasis on practical applications. Primarily taught at Hackforge and WEST, the program also partnered with the Essex County Library to bring the classes throughout the region.

The classes also gave the opportunity for professional female programmers to develop their public speaking and teaching skills. For participants, it gave them an opportunity to meet the women involved in our local industry and redefine their idea of a developer.

Anita’s Network is named after American computer scientist Dr. Anita Borg and her goal of 50% women in computer science. She was a researcher for Xerox PARC and founded the Institute for Women and Technology

Part of the Computer Girls initiative is to promote mentorship, networking, and support for women already working or looking to start tech careers in Windsor. Women are underrepresented in computing-related jobs, making up only 26% of all workers. Women of colour are even less prevalent.

Only 10% of Wikipedia editors identify as women. This event sought to strengthen diversity both online and in our community through collaborative actions that encourage knowledge sharing and skill building. A collaboration between Hackforge, Arts Council Windsor & Region and The School of Creative Arts at the University of Windsor, people of all gender identities took part in Windsor, Ontario’s first Art + Feminism Wikipedia Edit-A-Thon.
CBC News Interview with Organizers

The panel discussion then featured Ms. Williams; Elana Freeman, a project manager for Thyssenkrupp; Lori Dunford, a local computer programmer, and Sarah Mushtaq, an MBA candidate at the Odette School of Business. Moderated by Hackforge Managing Director, Sarah Morris, the panel focused on practical measures and policies that can improve the working situation for a diversity of people in tech.