Windsor Hackforge celebrated its official opening on May 30th with an open house and a seminar on the role of women in technology. Hosted by the Windsor Public Library, Hackforge is a shared space where creative minds come together to work on projects involving electronics, science and technology. It’s mission is to foster the DIY spirit and improve tech skills among the residents of Windsor/Essex.

Upstairs in the tech space visitors were invited to get into the spirit of DIY by making magnetized LED “throwies” while members showed off the projects that they’ve been working on since the group formed late last year. Some of the highlights included Hackforge’s self-built RFID security system, a homebrew 3D printer and an LED-based electronic sign. 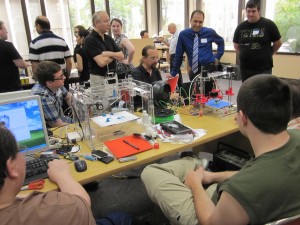 The seminar kicked off with an inspiring talk by Erika Carlson and Michelle Srbinovich, the co-founders of Girl Develop It Detroit. GDI is a non-profit organization aiming to empower women of diverse backgrounds to learn how to develop software. Erika and Michelle told their personal stories, described how they founded the organization’s Detroit chapter, and talked about the group’s achievements inspiring and teaching women to become coders.

After the GDI presentation, Erika and Michelle were joined for a roundtable discussion by a pair of accomplished Windsor women working in technology – Trudie Carlesso and Sherri Wheeler. Moderator Pierre Boulos guided a spirited and amusing discussion of the challenges, awkward moments and triumphs they’ve experienced as women in technology.