by admin in News, Projects 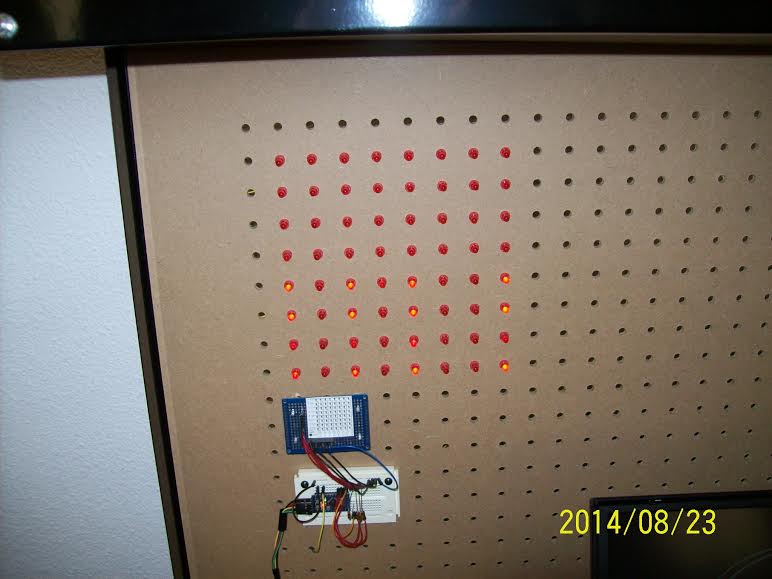 For the past couple of months Rob Caruso, one of the ingenious and industrious HF members has been quietly implementing a discrete 8×8 LED Matrix using the pegboard backing of one of the workbenches at the Hackforge.

The goal is to provide an educational platform, not a complete standalone display. The 8×8 LED matrix was chosen simply to utilize the existing pegboard surface. A conscious design aspect was to provide a simple ‘plug and play’ method for breadboarding experiments that utilize typical hobbyist microprocessor such as the Arduino, PIC and the ever popular Raspberry PI. Integrating the display into the existing backboard of the workbench has an inherent appeal for those who equate blank space as wasted potential. For this project Rob has blended 3D printed LED holders (his own design) with standard prototyping PCB boards to create a well-engineered design that will permit novice microprocessor (or RPi) programmers to show off their projects with a minimum of construction.

Rob has extended the utility of the matrix by providing a means of allowing the LED’s to be changed for different colours or replaced easily in the event of ‘design malfunction’. Using the 3D printer at the Hackforge, he designed a holder that snugly fits into the existing 1/4″ holes to secure the LED. A two-pin socket, glued to the back of the holder is fitted into strips of PCB board to provide a common bus for the Anodes(+) and Cathodes(-). What you end up with is 8 wires from the Plus side of the matrix and 8 wires from the Minus side that will fit into convenient plug-in headers. The intrepid experimenter needs only to connect their breadboard via short runs of jumper cables to these sockets, keeping everything in view. It should be noted too that the LED holders contain a plastic clip (part of the 3D composition) that secures the plug from popping out of the hole.

There is still some work to be done before this project can be pronounced ‘done’. In particular the wires running from the back to the sockets at the front need to be secured, and of course the position of the sockets themselves need to be finalized. Two standard 8-pin Arduino headers will likely be used, allowing for simple plugin-in ability from whatever device the experimenter chooses. We believe that simply mounting a typical Arduino UNO R3 board onto the backboard will be the ‘gateway drug’ to future experimentation.

The project can be considered completed, and ready for the enthusiastic hobbyist to develop their version of 8×8 PONG….

Click below for Terry McAlinden’s photo of the work… 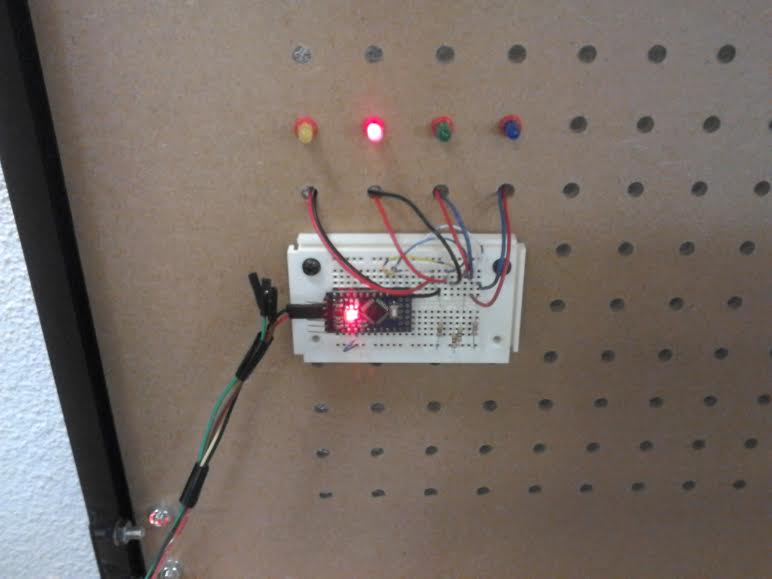 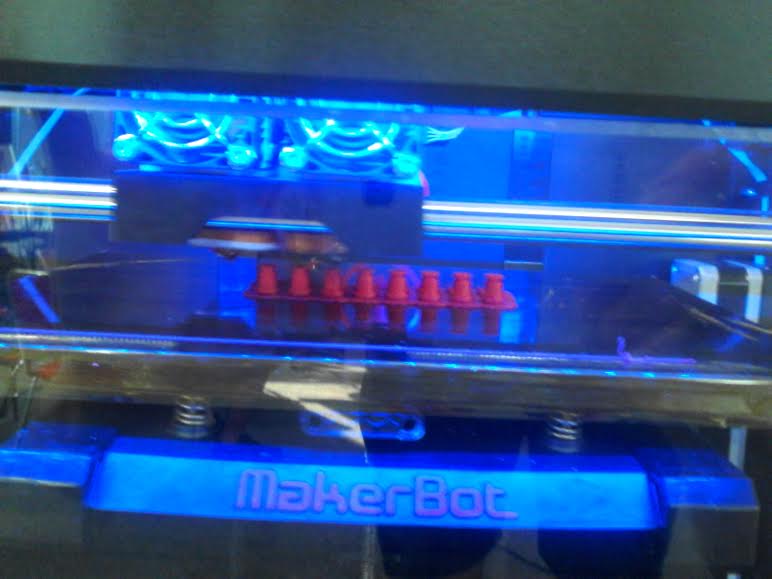 Groups of 8 LED holders produced by the Hackforge MakerBot printer. We need 64 at least, and a few more ‘just in case’. 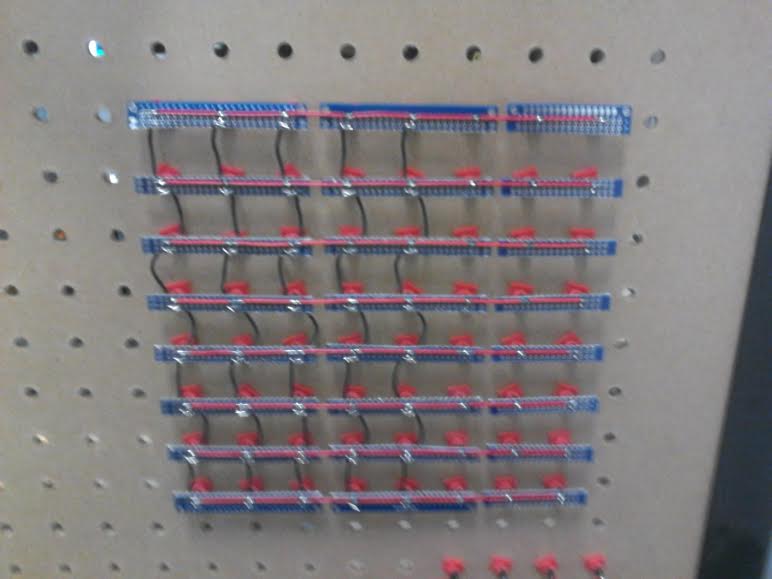 The back of the workbench, showing the engineered bus plane 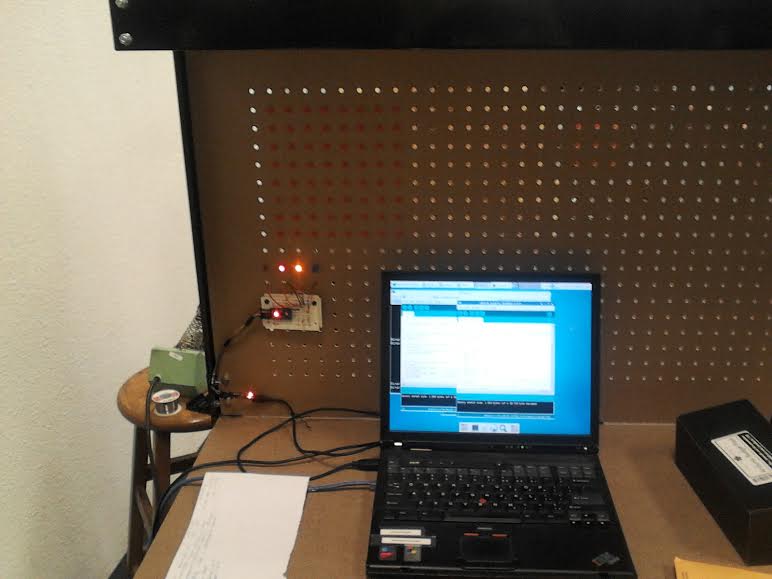 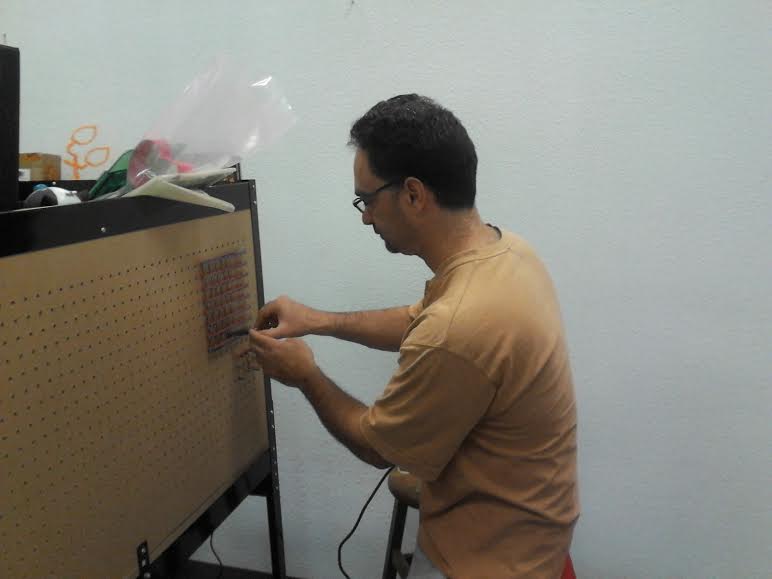 Designer and principal architect of this project hard at work